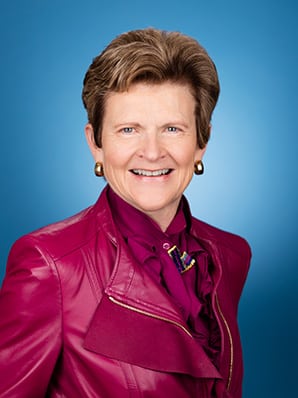 Julie Jones, a board certified and Licensed Nutritionist, received her BS degree from Iowa State University and her PhD in Home Economics/Food Science and Nutrition from the University of Minnesota. Currently, she is professor of nutrition in the Department of Family, Consumer and Nutritional Sciences at the St. Catherine University in St. Paul. She has twice been named St. Catherine’s outstanding professor and was awarded the Myser Award by the alumnae as a professor “who made a difference in people’s lives.” She held the 3M Endowed Chair in Science from 2000 to 2003 and co-leads the Center for Women, Science and Technology.

She has authored a book entitled Food Safety (Eagan Press, 1992) and edited a book Dietary Fibre: Bio-Active Carbohydrates for Food and Feed (Wageningen Academic Publishers, 2004). She is very interested in all aspects of nutrition science but is especially interested in whole grains and food-based solutions such as the DASH diet and 5-A-Day. She regularly writes and speaks about whole grains and dietary fiber, sugars, starch including resistant starch, the glycemic index, fat, vitamins and antioxidants; food safety issues such as microbial safety, irradiation, pesticides; and issues affecting women such as dieting and body image. As a North American editor for Food Safety and Security (an international newsletter published in Oxford, England), she writes a column on biotechnology, additives, contaminants, pesticides and other chemicals and food irradiation. She also is a nutrition columnist for Cereal Foods World, Lipid Technology, and Food Processing.

She is a frequent speaker for many professional conferences and consumer organizations, locally, nationally and internationally such as the International Cereal Congress held in Vienna in July 2005 and a international meeting on the glycemic response in Brussels in 2005. She is part of the General Mills speaker’s bureau and as part of that, speaks to health professionals around the country. She has co-organized two conferences on whole grains with the most recent one being the Whole Grains Summit held in May 2005.

She is actively involved in trying to educate the consumer against frauds and myths in nutrition and food safety. To that end, she has appeared on radio and TV shows in many cities in the United States has answered hundreds of consumer letters in the FIXIT column of the Minneapolis Star Tribune.
She has been active in many professional organizations. For the national American Association of Cereal Chemists (AACC) International, she is past president and chair of the board of the national organization and has served in many capacities both nationally and locally. Currently, she heads the Whole Grains Task Force and the Glycemic Carbohydrate Definition Committee.

She has been president of the Twin Cities Home Economics Association, Minnesota Council Against Health Fraud, Minnesota Nutrition Council and on the board of the Minnesota Dietetics Association. For the Institute of Food Technologists (IFT), she has been chair and secretary of the Nutrition Division. She has served as chair of the Minnesota section of IFT and has held many other roles locally and nationally. She is also a member of the American Dietetics Association is a frequent speaker and organizer of symposia for their annual meetings. She also belongs to the International Association of Culinary Professionals and Les Dames d’Escoiffier.

She is a scientific advisor for the Joint Institute of Food Safety and Nutrition for the University of Maryland and the U.S. Food and Drug Administration. She is a scientific advisor to the carbohydrate committee of the International Life Sciences Institute. She is on the scientific advisory panel for the Grains Food Foundation and Chartwell. She has been the consultant for many companies. She teaches classes in nutritional biochemistry, advanced nutrition, basic food science, experimental foods, sensory evaluation, issues in the American and world food supply and intercultural food patterns.

Her hobbies include skiing, reading, traveling, hiking, music of many genres, cooking and gourmet foods and wines. She is passionately interested in food and is a James Beard Society Judge of restaurants and cookbooks. She is a member of Roseville Lutheran Church and volunteers with organizations advocating for the handicapped.